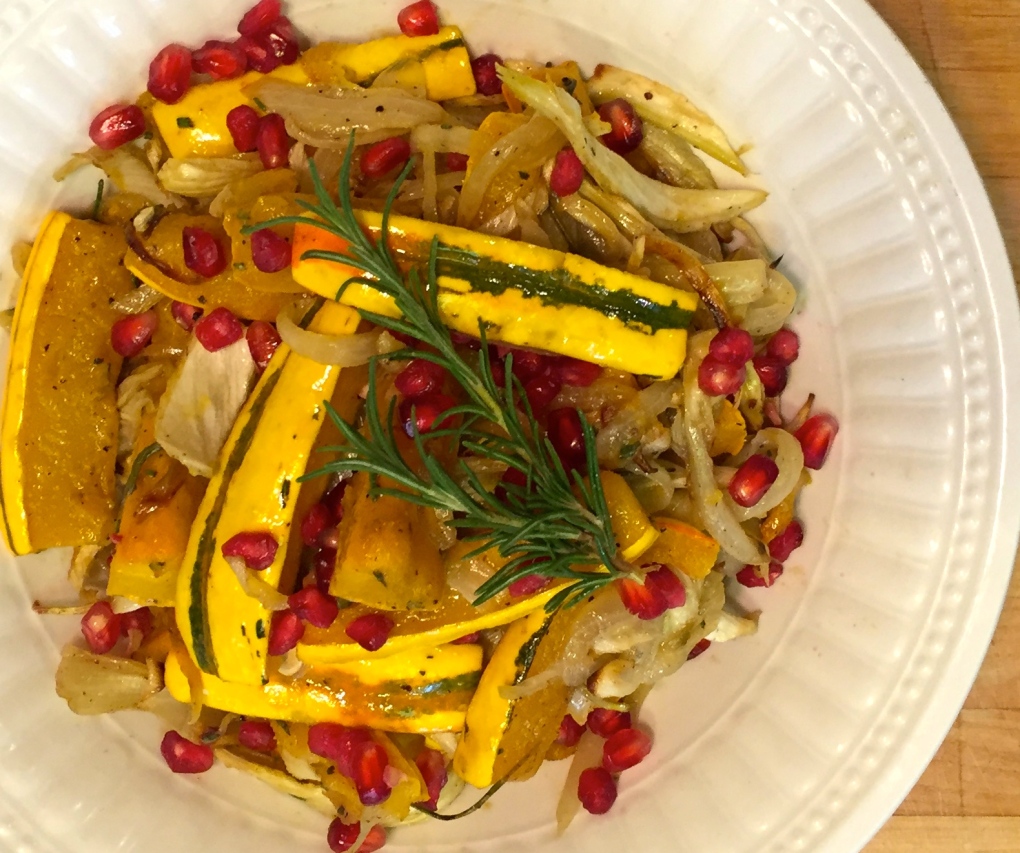 Okay, admit it. I’ll bet that more times than not, when you glance at the delicata squash at the market you think, “Wow that would make a lovely table decoration.” Don’t feel in the dark. It is a cool looking squash. And I am sure you are not alone. Here is the great news though. It tastes better than it looks, and you can eat the whole thing, skin and all. I guess that’s why they call it “Delicata,” although I have done no research to back this notion– just a hunch. This recipe is extremely easy, bringing delicata squash and fennel together like soul mates. Add this to your Thanksgiving menu or serve it as a quick and easy weeknight vegan meal. I recently featured winter squash on my nutrition blog in an article titled 10 Superfoods for your Autumn Grocery List. So dig in, and know you are getting some awesome nutrition. Oh, and you can serve this right out of the oven, or make it a couple hours ahead and enjoy it at room temperature.

Nothing completes a crisp autumn or rainy day like a bowl of creamy soup. I am pretty sure that there isn’t a person out there who doesn’t have a nostalgic attachment to a “cream of something” soup from their past or childhood. Well I have some good news about that! You can keep your creamy, comforting stroll down memory lane while also avoiding the bad and promoting awesome, clean nutrition. This soup is very easy to make and is also great as a cold vichyssoise style soup if you have leftovers. The salsa is a tangy compliment that offers extra rich flavor in the truffle oil, but also completely optional.

Greetings! I know it’s been a while since the last post. To be honest, my creativity took a brief leave of absence. I also became fixated on creating the perfect homemade vegan ice cream, that also stores well. That sort of consumed me for a few weeks. No ice cream recipe to post yet, and now it is becoming irrelevant, as summer is going away. So, on to one of my favorite subjects: Quality kitchen time during the fall season.

Let’s kick it off with a very simple, and surprisingly filling dish using just five key ingredients. Fresh sage, garlic and winter squashes are good friends in my book. This recipe sort of takes the traditional squash ravioli with sage, and sort of deconstructs it and puts a yummy vegan spin on it. Don’t be afraid to ramp up the garlic and the sage. Enjoy!